Dubbed as A Duet to Forever ( The Songbird and the Songwriter Wedding of the Decade). Its an honor to be picked as their florist for the ceremony last December 22, 2010 at Terrazas the Punta Fuego at Nasugbu Batanggas..   To see the actual wedding VIDEOS pls click the link:

Setup Details:
The ceremonial area are made of extended platform from the infinity pool of The Peak of Terrazas the Punta Fuego beyond that is a cliff of the mountain. We created a acrylic aisle in the middle of the infinity pool to reach the ceremonial area. The gazebo are made of solid lumber and coffee twigs, around 14 feet tall, to create a theatrical scale. The ceiling were adorned with thousands of champagne gold oraganza ribbons and crystals that dance when the wind blows.

The aisle and the pavillion were adorned with hanging frosted lamps and coffee twigs. Lush imported flowers from holland from lisianthus, matioala, hydrangeas, equadorian roses, brassicas and succulents to create texture.
Some pictures from Regine Velasquez facebook. 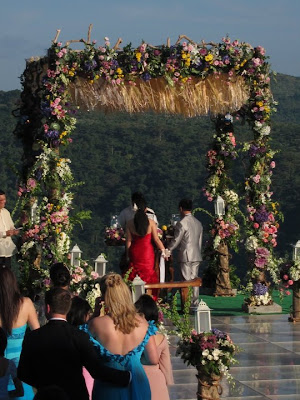 Celebrating Christmas with the Mega Star Sharon Cuneta. Please do watch Sharon at Home December 18 at LifeStyle Network. I have one episode with Sharon. I got some tips on preparing your Noche Buena Table and will show you the Christmas Tree i made for her. HAPPY HOLIDAYS! Everyone!
Read more »
Posted by Teddy Manuel at 7:50 PM 6 comments:

Teddy Manuel
Manila, Philippines
Teddy Manuel’s Flowers & Events’ paramount objective is to provide spectacular and one of a kind floral arrangements for one of a kind events. By bringing in Manila’s most gifted and creative design talent, and by using only the finest products available locally and abroad. Consistently produce floral designs of exceeding beauty for a discriminating clientele.